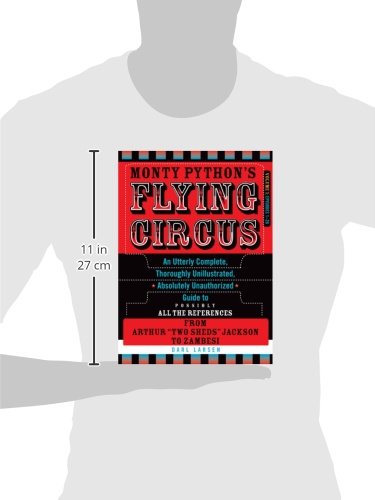 Brand : Brand Taylor Trade Publishing
from USA
to Norway
in 5-8 days
At your doorstep by Aug 02  to Aug 05 with standard delivery

In 1969, the BBC aired the first episode of a new comedy series titled Monty Python's Flying Circus, and the rest, as they say, is history. An instant success, the show ran until 1974, producing a total of 45 episodes. Despite the show's very English humor and allusions to many things British, the series developed a cult following outside the United Kingdom, particularly in the United States. Known for its outrageous humor, occasionally controversial content, and often silly spirit, Monty Python's Flying Circus poked fun at nearly all institutions—domestic or foreign, grand or intimate, sacred or not. Indeed, many of the allusions and references in the program were uniquely British and routinely obscure, and therefore not always understood or even noticed outside the British Isles. This exhaustive reference identifies and explains the plethora of cultural, historical, and topical allusions of this landmark series. In this volume, virtually every allusion and reference that appeared in episodes from the last two seasons—whether stated by a character, depicted in the mise-en-scène, or mentioned in the printed scripts—is identified and explained. Organized chronologically by episode, each entry is listed alphabetically, indicates what sketch it appeared in, and is cross-referenced between episodes. Entries cover literary and metaphoric allusions, symbolisms, names, peoples, and places as well as myriad social, cultural, and historical elements (photos, songs, slogans, caricatures) that populate and inform these episodes. See volume 2 for the third and fourth seasons (episodes 27–45). Volume 1 Entries Include: * “Arabella Plunkett” * Group of famous characters from famous paintings * "Hell's Grannies" * “Kandinsky” * “Spanish Inquisition” * “total cashectomy” * “Two-Sheds” * Vicar sitting thin and unhappy in a pot * “What's all this then?” * Raymond Baxter type
Show More
Reviews